Why Don't More Women Choose Physics as a Major? 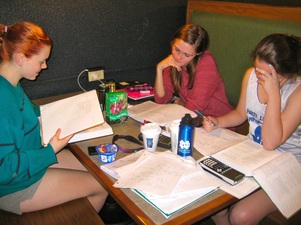 In the United States, undergraduate women rarely choose physics as their concentration of study. Indeed, only about 18% of Bachelor's degrees in physics are awarded to women, which is quite a significant disparity.  To many, this number illustrates a serious issue within all the physical sciences- women aren't studying them at a large rate. With such a low number, it seems only natural to wonder why they choose not to study physics.

Believe it or not, there are many (women included!) who think that it reflects some innate difference in intellectual capabilities, that men are naturally 'better' at physics than women are. You may recall the infamous incident in which Harvard professor Lawrence Summers speculated that the gender gap existed partly because men seemed to be naturally better at mathematics. To be fair, his comments were partially justified by a study that was conducted by Janet Hyde, a University of Wisconsin psychologist. Her findings showed that young boys are overrepresented in the top percentile of math tests by a factor of 2:1; even though there was virtually no difference between the male and female average scores.

This information still does not explain the gender gap, however, because the same tests have experience great variability across different states and races. Interestingly, the gap in the top percentile for math is reversed in the of Asian-American students; the girls outnumber the boys. Additionally, once women enter into careers in physics, there is no numerical evidence to suggest that they are not as successful as their male counterparts. The only legitimate numerical disparity is the fact that women account for 47% of high school physics enrollees, but only 18% of Bachelor  degrees are earned by women.

Some of the reasons that are given for the gender gap in physics are that women face discrimination in the classroom from their professors and fellow students. Others believe that the disparity has a simple cause- women just aren't interested in the field.

Dr. Arthur Thorpe, a physics professor from Howard University, feels as though low female representation in physics is not due to discrimination or a lack of ability at all. Rather, he says that female participation is partly linked to peer pressure from friends and family. In his opinion, the perception of what women should study is strongly related to their eventual major choice.

"Women have always been involved in physics, so they're definitely capable. And peer pressure is the reason why a lot of people do what they do.", Dr. Thorpe says.

Dr. Thorpe adds that Howard University, a historically black university in the District of Columbia, was not a place in which one would be able to observe the national norm of low female enrollment in physics. About 15 of the physics professors were female, according to Dr. Francis, a colleague of Dr. Thorpe's.

"We have a lot of female physics and astronomy majors here at Howard." Chuckling, he added that, " Most of them are more confident than the men, actually."

Indeed, as I walked the halls of Howard's physics department, I noticed many girls studying with their male and female classmates. Waiting outside of classrooms, I saw a girl in a hot pink hoodie pore over notes, and two girls wearing sweatpants go to get a soda out of a machine, laughing. They seemed comfortable in their environment and relatively assured of their abilities. They definitely weren't under represented either.